HSMAdvisor has helped me cut quite a few chips, so I’d like to offer my feedback on HSMAdvisor 2.xx. It’s a great piece of software and developer puts a hefty amount of work into it, so it’s my goal that this feedback can help make it even more useful for other, quieter users. There’s a lot here, but hopefully the good parts can be implemented and the less practical ideas discarded.

1.) Turning off Circle/Ramp for a cut often causes RPM/Feed/Plunge RPM and Plunge Feed to get stuck at -1. Re-enabling Circle/Ramp doesn’t fix it. Only workaround I’ve found is to switch cuts.

2.) Tool number column (T#) missing in the new Tool DB. I heavily rely on tool numbers and am guessing it just got missed during the Tool DB rewrite.

3.) Automatically calculated parameters (those highlighted green), still don’t stay highlighted after closing and reopening. I raised this a while ago. No worries if it’s still being tracked, just want to make sure it wasn’t forgotten.

4.) When manually entering values in the Speeds and Feeds textboxes next to the sliders, the text validation is wonky. For example, consider changing feeds from the default of "100" and typing in "29.” First I delete the “100” text but it inserts a zero and I end up entering “290” by accident. In other words, the textbox validation that adds a “0” when I delete all the values in the textbox in preparation for entering a custom value, but it should only add a “0” if the textbox loses focus.

5.) The Workpiece Machine section lists max torque rounded down to 0.1 ft-lbs. Same for Max Power in Machine Profile. Showing (and calculating!) to two decimals would be easier for janky sub-kW spindles.

6.) Upgrading from HSMAdvisor 1.xx to the beta of 2 (unsure which version), erased all Comments for my cuts when migrating my tool library.

7.) When opening HSMAdvisor, if you ALT+TAB away on splash screen it won’t show in taskbar until ALT+TAB back. Maybe a .NET or Windows bug?

9.) CAM Toolpaths does nothing?

10.) It’s probably a stretch to say that the new DeWalt DWP611 tool in the machine library has 1.25 HP, despite what the box says. Perhaps around 0.8 HP off the top of my head. I have a roughly similar Makita RT0701c and it can only manage about that much. Just don’t want some poor soul who just came back from Home Depot to damage the thing.

11.) Fusion plugin or fusion tool export. There must be a lot of pressure for this already, so I’m not going to belabor the point. The new Fusion tool import is already very welcome.

12.) Circle/Ramp is difficult to work with as a separate box and overriding Speeds and Feeds fields. I would love to see the Circle/Ramp output as a new fields in Speeds and Feeds. If Circle/Ramp is not enabled, the field would be grayed out. The label next to the text box would change depending on whether Ramp Plunging or Ramp Milling was enabled. Perhaps I’m misunderstanding how Circle/Ramp works, but it’s not intuitive for me that it changes Speeds and Feeds values and causing ambiguity when, in my mind, it should be its own field.

13.) Let me type in a tool in the Speeds and Feeds tab, like I can do with materials. Ideally, it would be a listbox with all my tools, with search functionality. Typing in the listbox would show results from the tool Comment, Brand Name, Insert Name, T# and Type. For instance, typing “ball” would show all ball mills, and typing “6” would show tool 6 first, followed by any fields that have “6” in them like the Insert Name). This system works well for materials, and can save quite a bit of time by letting users not have to switch tabs to change tools.

14.) Same as above for Cuts, make it a listbox that I can type into that returns results from Comment, Operation, Surface Finish or, if a number between 1-5 is entered, the cut rating.

15.) Have a Stickout Override field in Cutting Parameters. It’s wonky right now where there’s a stickout field in Tool Data, but I have to change it and save my tool data for each stickout change for each cut. Stickout is ultimately a function of the cut you’re going for, so it makes sense that the user would override it (if needed) in Cutting Parameters. If the same as the “default” stickout in Tool Data, the field would be green.

16.) Have the search box in the new Tool DB search series as well. Often I’m looking for a specific tool by a few digits of the model number.

17.) Have a way to show just cuts in the new Tool DB. Sometimes I want to compare and sort a few cuts to do a sanity check or just to contrast them. Being able to “hide” the tools and just show cuts (with tool comment or series in the first column) would be good.

19.) Option to link default cut to named/existing cut. For instance, be able to mark a cut as “default” in cut info. This will then have that cut be loaded by default every time the tool is loaded.

21.) New Tool DB is a huge improvement. The filter on top is much cleaner, as is the sidebar.

22.) Selection of columns in new Tool DB is much easier/saner.

23.) Text rendering is better on high-dpi displays with .NET 4.5. Hopefully wasn’t a headache to migrate.

24.) There’s some JITing or something that made loading Threads/Geometry tabs a bit faster I believe. Very useful tabs, so faster loading after startup is appreciated.

25.) Mousing over clickable text in speeds and feeds changes mouse icon. Improves discoverability for new users quite a bit.

26.) Fusion tool import. Very, very nice. Too late for me as I entered it manually, but shout this from the rooftops to the Fusion users, it’s a big feature. Hopefully exporting to fusion coming soon (or a Fusion plugin, even).


Thanks for all the work you put into HSMAdvisor, it’s an invaluable tool in my machining toolkit.

Thank you for the feedback.

I have just released an update that fixes most of the reported issues.

To get cut comments back, you need to open the old tool database file again.

Because HSMADvisor renames tool database files to "*.tooldb2.xml", the old file is still there with *.tooldb.xml extension.

I will add your nice-to-have things into the triage.

Thank you for the feedback!

Appreciate the very quick fixes and response. 2.1.2 looks good but it introduced a weird bug possibly caused by Circle/Ramp and the "stick to predefined power curve" checkbox in machine profile. Repro:

1.) Load DeWalt tool (or any tool with Power Curve defined and both Use Power Curve/Stick to Predefined Power Curve checked).

Issue: Speed slider will now be stuck, moving it will cause some validation logic to instantly move it back and unable to be changed. RPM will be stuck at some value, trying to reset various fields will occasionally cause RPM field to change to various speeds on the predefined power curve seemingly arbitrarily.

Issue: Now, everything goes back to normal, fields are changeable. However, the RPM values don't stick to the predefined power curve per the machine profile.

It's a difficult bug to describe, but hopefully it's easy to repro and fix. Thanks for the update and other than this strange issue for my weak machine it's running great.

I will look into that.

By the way are you sure you need to use "Sick to pre-defined RPM values"?

It is only for spindles where you can not smoothly control the RPM and it can only be set to certain values IE gearboxes etc.

I use it for my Shapeoko, which just uses an off-the-shelf router (Makita RT0701c clone). It has a dial like most routers that manually controls speed for the constant-torque motor in the router. One of the nice HSMAdvisor features is that I can ask the software to lock its RPM to the speeds on the dial with that setting. Thus I don't have to interpolate the calculated RPM to the notches on the router speed dial. Perhaps not the intended use, but for amateur garage machinists with router setups like the Shapeoko it's quite handy.

Saw the Router option (recently added?) in the machine profile but not sure what changes it makes so I've left it defined as a Mill.

The issue circle/ramp has just been fixed.

It appears that the units for "Max. Cutting Force" should be changed to lbf rather than "kg" (units of mass rather than force?) 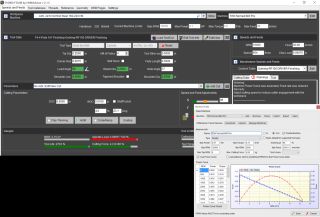 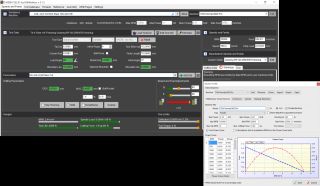