The Speed and Feed calculator allows machinists and programmers to calculate cutting parameters for multiple materials and cutting tool types. 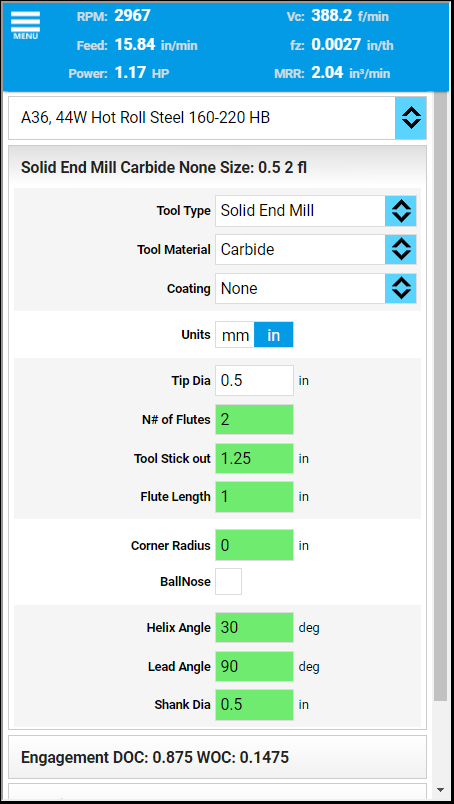 This free speed and feed calculator allows CNC Machinists and Programmers to calculate cutting parameters for a wide variety of materials and tools.

FSWizard is the first and only online speed and feed calculator to consider dozens of variables when calculating Milling, Drilling and Turning Speeds and Feeds.

Please post your questions and suggestions on our support forums!

What are Machining Speeds and Feeds

One of the basic tasks a machinists must learn to perform is calculation of speeds and feeds required for milling, drilling and turning.

It starts from knowing your workpiece materiel and tooling you are going to use in order to cut it.
The combination of these two factors determines your initial Cutting Speed and Chip Load that you can put into the speed and feed formulas to calculate the cutting tool RPM and feed rate.

Cutting Speed is the speed at which the tip of the tool travels through material. It is commonly expressed in Surface Feet per Minute (SFM) or Surface Meters per Minute (SMM).

Chip Load is the advancement of each tooth per revolution of the tool.

In other words Chip Load is the thickness of the material that each tooth removes per each revolution.

So how do you find the Cutting Speed and Chip Load for your tool?

Most experienced machinists simply remember cutting speeds and chip loads for materials they machine most often.

Here are commonly recommended cutting speeds and chip loads for carbide tools for a couple of materials:

When you have manufacturers data simply find your tool in the catalogue and cross-reference the cutting speed and chip load against the tool diameter:

Since cutting speeds can be in either Imperial (SFM) or Metric (SMM or m/min) units, you have to use two formulas to calculate the RPM.

More about formulas needed to calculate turning, drilling, and of course milling speeds and feeds

Here are a few basic formulas with term explanations to get you going:

For turning applications, we do not need this formula since Spindle Speed is usually given in Constant Surface Speed (CSS), which uses SFM value directly. But if you still want to use the RPM formula, then the diameter value is the actual diameter of the workpiece.

The formula is used for milling and drilling applications. Please note that some tool manufacturers provide their recommended feed rate as feed per revolution. In such cases do not multiply by the number of teeth.

Easily Calculating Speeds and Feeds on your smartphone or computer

Our own free Speed and Feed Calculator can help you calculate cutting parameters for many different material groups.