Haloween sale is ON!

All HSMAdvisor Licenses over $90 are currently 15% off!

This is another video from his Productivity Series.

In there we get a quick demonstration of HSM techniques Eric is using to produce his beatiful vise.

Also my own HSMAdvisor is featured there!

Orange Vise are produced in the USA.

I have added Fillet Calculator to our android version.

It allsows to calculate tangent points on a circle and two lines.

All you need to specify is an angle beteen them and a radius.

Also lines intersection point can be moved around.

As a result it returns coordinates of the points and the centre of the circle.

Normally i can't keep secrets and announce what i am working on.

But this time is different.

Nobody has done anything like that. I can only tell you that i will be adding more tools for aiding manual programming on the control.

The link is on the right :)

Check this video out.

The whole thing is pretty impressive, but the best part starts closer to the middle of the video. At around 3:20 you can see the size of the machine. Truly amazing.

Note: TURN YOUR VOLUME DOWN

I have been asked to create a tutorial on how to work with the tool library, so here it is.

myCut Tool Database is quite a unique thing.

It not only contains all of your tools, but also each and every tool can have multiple operations or "Cuts" attached to it.

Everything is very simple.

Each entity behaves according to specific rules and "knows" specific kind of data.

Please read more to learn how it all works.

I have just uploaded a new release of HSMAdvisor.

I have decided to extend trials every time major releases come out.

This will happen every several months or so.

This release is pretty big. So every one who has not purchased yet gets 30 days more to play with it.

We have material cross-reference tool.

It allows you to quickly figure out material group for a large number of materials. Around 1000 of them.
You can access it by pressing "MORE" button next to material drop-down list.

Here is it looks: 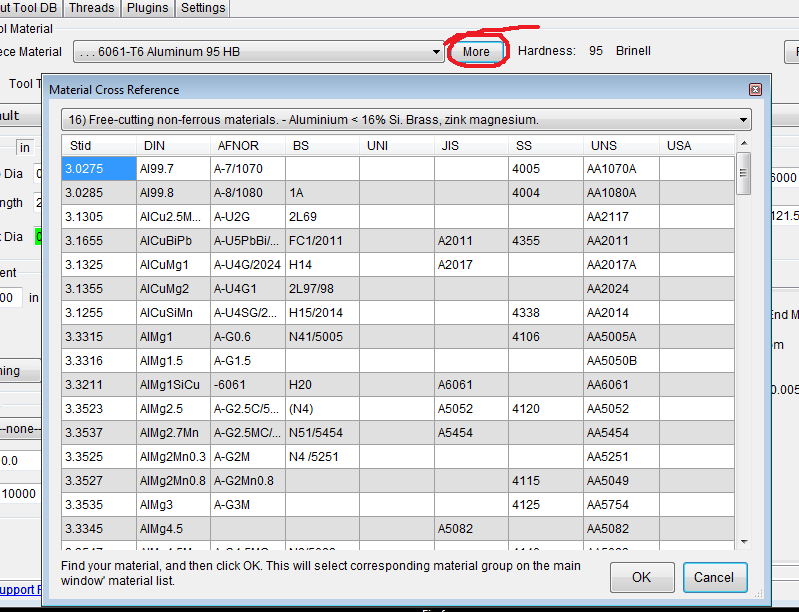 It allows to show you how tool life reacts to changes in speed, feed rate and depth of cut.

Nobody else has this feature- it is absolutely unique to HSMAdvisor and that is in part why i decided to extend trials this time.

Besides tool life gage there is a new tab in results area.

It is called Gages.

It shows important information like what percentage of deflection, torque and machine load we are running at the moment.

It helps to figure out at a glance if something is out of whack. 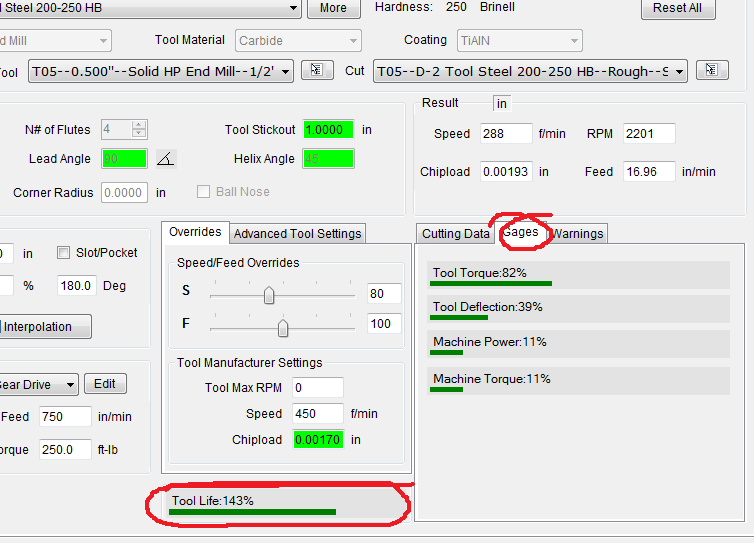 As always feedback is welcome.

I was originally going to introduce new License types on september the 1st.

But it turned out to be a little harder than i thought and everything got delayed by almost one month.

The revised date of september the 30th is still standing though.

If you have been procrastinating, this is your time to save.

Also check out my Online store that i coded myself.

Here is a video of a 3 flute Hi-performance endmill slotting aluminum 0.75" deep per pass.

Well, not entirely slottimg, more like pocketing, but the very first move is a full width slot.

First i calculated the cut on HSMAdvisor.

Used 6061 aluminum as material and HP endmill at a tool type.

Tool torque and deflection limits were both set at 100% and performance slider was at maximum.

This is what it came up with:

Looking at how easy it went i think i should allow for more load in my calculator.

If you have not yet tried HSMAdvisor, make sure you do.

You will be amazed at how much productivity you have been missing out on.