HSM or High Speed Machining is becoming more and more popular each day.
Many of us have seen those youtube videos where endmlls remove large amounts of material at high speeds/feeds.

While definitions of HSM may vary between tool manufacturers and even individual shops, the physics behind it remain the same.

In this article i would like to explore flat endmills.

HSM is not about ramping up your speed/feed overrides to 200% and puling out your smartphone to record another youtube-worth video.

HSM is a complex of programming, machining and tooling techniques aimed at radical increase of productivity.

The cornerstone of HSM is low radial and high axial engagement of an endmill with the workpiece.

There are many CAD/CAM systems that allow you to create HSM tool-paths. Mastercam's Dynamic milling and SurfCAM's Truemill are some of them.

When radial cutter engagement with the material is smaller than the radius of the tool an interesting thing happens.
Chip load- the distance the tool advances per cutter revolution per tooth- does not equal the actual chip thickness anymore.
Chip thinning mainly happens at radial engagements below 30% of the diameter.

In order to get compensated chipload you need to multiply recommended by manufacturer chipload by the chip thinning factor.

Usual Radial Engagement for HSM toolpaths however is between 5 and 15%.

Axial depth of cut varies depending on geometry, but 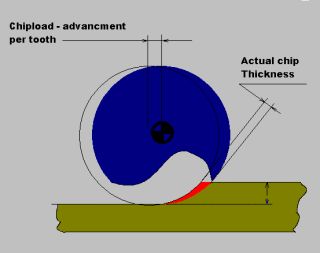 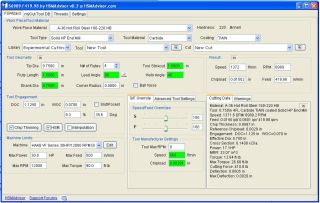 Quite often in order to start cutting in x-y direction you need to first plunge into the material.

Here is a compliled list of recommendations for different kinds of plunging that works in most if not all cases.

Dont forget to reduce cutting speed for ramping above 5deg by half!

Lets first draw a pretty image that shows us everything we need.

What are Machining Speeds and Feeds

One of the basic tasks a machinists must learn to perform is calculation of speeds and feeds required for milling, drilling and turning.

It starts from knowing your workpiece materiel and tooling you are going to use in order to cut it.
The combination of these two factors determines your initial Cutting Speed and Chip Load that you can put into the speed and feed formulas to calculate the cutting tool RPM and feed rate.

Cutting Speed is the speed at which the tip of the tool travels through material. It is commonly expressed in Surface Feet per Minute (SFM) or Surface Meters per Minute (SMM).

Chip Load is the advancement of each tooth per revolution of the tool.

In other words Chip Load is the thickness of the material that each tooth removes per each revolution.

So how do you find the Cutting Speed and Chip Load for your tool?

Most experienced machinists simply remember cutting speeds and chip loads for materials they machine most often.

Here are commonly recommended cutting speeds and chip loads for carbide tools for a couple of materials:

When you have manufacturers data simply find your tool in the catalogue and cross-reference the cutting speed and chip load against the tool diameter:

Since cutting speeds can be in either Imperial (SFM) or Metric (SMM or m/min) units, you have to use two formulas to calculate the RPM.

More about formulas needed to calculate turning, drilling, and of course milling speeds and feeds

Here are a few basic formulas with term explanations to get you going: