As unhappy I am to learn that something may be wrong with the software I develop and love, negative feedback is essential in learning whether i am doing everything right.

So a couple of days ago I received an email from a somewhat disappointed user.

He (lets call him Peter) was complaining that HSMAdvisor calculator gave him "excessively high" speeds and feeds for his 3/4" 4 flute 3.0 LOC  end mill in aluminum.

With the data Peter entered he was getting around 10000 RPM(SFPM 2117) and the feed of 270 inches per minute while usual practice in the shop was side-milling aluminum at that (2.8" axial) depth at only 325 SFM

After double-checking the numbers I replied that in fact his numbers seemed very slow and if for some reason he HAD to run that slow (heck, i machine most steels faster than 325 SFM) due to some conditions, perhaps, he was ought to change the conditions themselves.

This is what I am getting for Peter's end mill setup: 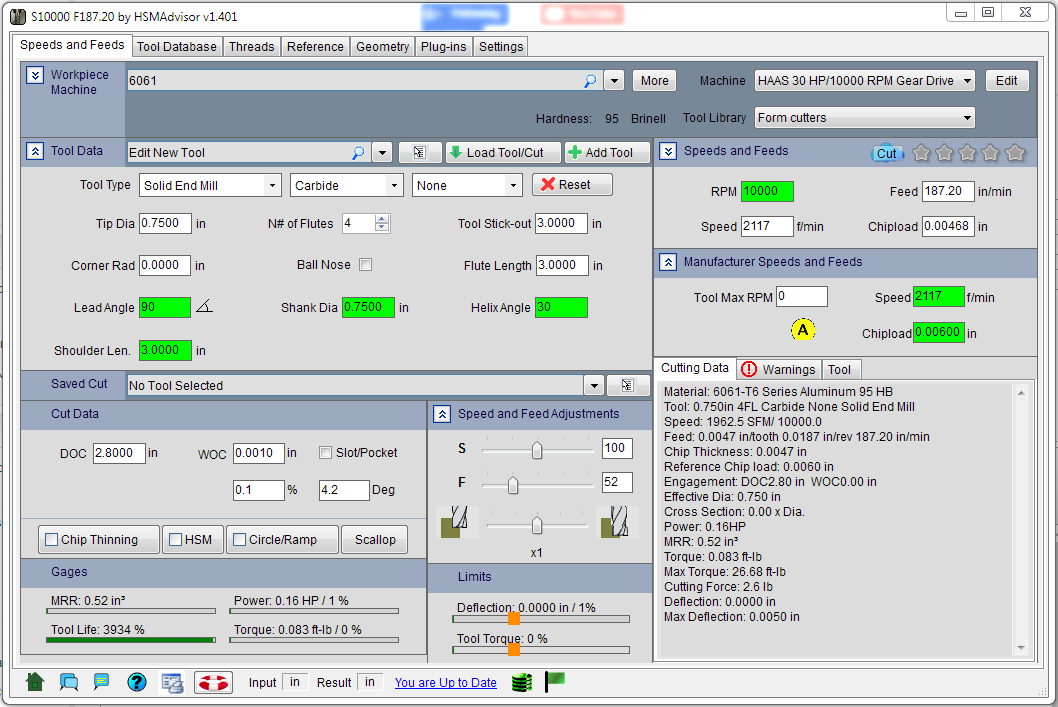 I set the feed override to 50% because it is obvious 0.001" width of cut operation is finishing.
We can see that despite quite long tool projection, deflection in the cut remains below detectable number.
Which means that theoretically he should have been able to run with the speeds and feeds suggested by HSMAdvisor.

In fact it should be able to take a much heavier cut no-problem!

Peter still insisted that my calculations were wrong and that he did not care how fast I ran steels and he wanted the calculator to output the magical low SFM number they were so used to in the shop.

But hey, perhaps my Calculator is wrong and its not possible to spin a 3" long 3/4 dia endmill that fast?

Back in the days when i was machining aluminum all day long i did use similar numbers but never got to record a video.
Luckily there is YouTube for that.
Check out this guy running his  SGS S-CARB 3/4" DIA X 3 1/2 LOC  end mill cutting QC-10 aluminum at 12000 RPM 360 inches per minute

Clearly 10000 RPM and 270 IPM does not seem that radical compared to that!
In fact HSMAdvisor is suggesting numbers very close to the ones posted in the video.

So what was the reason Peter is using such conservative cutting speed (he never mentioned the kind of feed rate he was going at) ?

Perhaps he was getting chatter and/or was afraid of snapping his cutter?

One thing stands out to me from this story is Peter mentioned he is using a 4 flute endmill. Knowing that usually Aluminum-specific cutters come with 3 flutes, I immediately thought that he perhaps is using a wrong tool for the job. Incorrect tool will cause al kinds of problems like chatter, bad surface finish and such.

Unfortunately Peter never told me what were the reasons for using the current low cutting numbers. Only that my calculator's numbers were wrong for his application.

If I were Peter I would call the SGS guys and ask them to set up a test with their tool. With the $250 cutter on their tab he will not be as afraid to snap it:)

Try HSMAdvisor Speed and Feed Calculator too. Aside from suggesting cutting Speeds, Feeds, Depth of Cut it will aslo tell you about the Tool Deflection, Spindle Load and tons of other useful information that will help you stay safe while being productive.

In this particular case Peter could easily increase his productivity tenfold versus the old numbers. I hope this makes him reconsider his current approach.

Nobody has to machine aluminum at 325 SFM these days!