Today i got another review on my free FSWizard Android app.

It wasnt bad. The guy gave 4 out of 5 stars, but then he added that he would gladly pay 4-6$ and that 18$ for the pro version is beyond reasonable.

I should have shut up.

But i never can.

I replied that the price is what it is, explaided my point of view and thanked him for a good review.

He then changed his rating to just two stars...

And then denied that he initially gave me 4!

Sir. Take your business somwhere else.

Update: guy changed his rating to one star and wrote he does not know what 4-6$ i am talking about.

Friends, if you know a guy named David Alwine, keep away from him. He is an utter lying jerk! 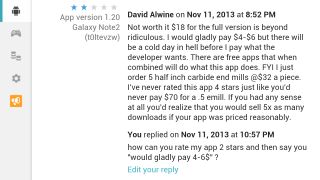 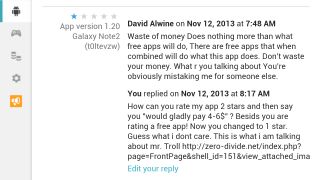 the good the bad and the ugly. They all have a right to speak up which is why I shelved a rotary table project. No one wanted to compemsate me for the time and heart ache it took to program. they did not understand what it took to complete a software / hardware project and expected their friend (me) to give it away.
But I survived and my world is quite and peacefull.
Smile be happy.
john K