Every month we are getting a good amount of feedback and suggestions.

Everything is getting prioritized and eventually implemented. Urgent stuff is getting done fast. And other "nice to haves" are getting pushed down according to their usefulness / difficulty (yes, everyone secretly wishes my program could also edit and create HSM g-code :)).

It is amazing, but almost half of HSMAdvisor's features were originally suggested by our loyal users!

The latest update HSMAdvisor 1.213 addresses some of the feedback I have received last couple of months.

So the New features are:

Let's go over the most important ones here:

Default Depth and Width of Cut (DOC/WOC) are now suggested according to the available machine Horse Power.
The way it works is: If Cut exceeds the available HP, the calculator recalculates the recommended DOC/WOC until the estimated HP falls below the Machine HP. 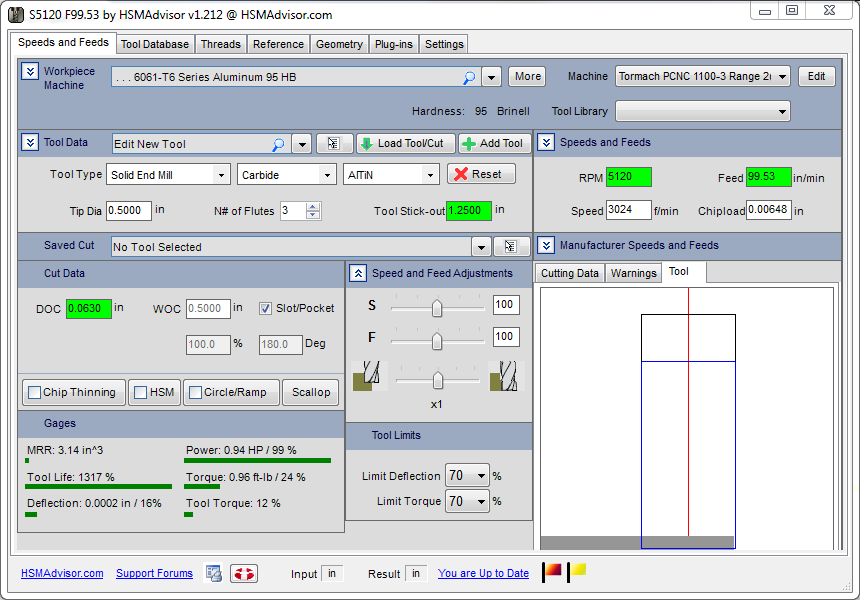 You can see how default DOC was recalculated to account for little 1.5 HP Tormach spindle.

Now this feature at times produces somewhat unintentional consequence: if you drag the performance slider to the left, it decreases the Chipload, but that causes HP limit to change and it may actually suggest larger DOC - contrary to the function of the Performance Slider, which is supposed to decrease DOC in this situation....

I will wait for some feedback on this feature and see which way i should refine this behaviour.

When working on MasterCAM hook i noticed that when i save MC operations within HSMA database its size grows exponentionally.

It testing I quickly went over "comfortable" 10MB size. Thus i decided that Shared Tool Data Bases will be compressed as they are written to the disk. This will make sure files are written promptly and network resources are used better.

Don't know why i have not thought of it sooner!

Now there is a catch: You will not be able to open a shared database in HSMAdvisor version prior to 1.213
If for whatever reason you need to do so, save your databases with "Shared" flag off in settings

3. Display of Stock status on Tool Data Base tables

This one is simple.

There is now a new column to the Tool Database table that shows the current stock status of each displayed tool.

There were also other improvements not worthy of mentioning right now.....

Keep in touch for further updates!