Ramping feedrates do not appear to be correct. Tests conducted using material: "7075-T6 Aluminum 150 HB" and machine: "Generic VMC". "Reset everything to default" was used, and no values other than ramping Angle were changed.

According to the "Circular Interpolation/Ramping" dialog - when Straight Line ramping is chosen, calculated adjustments are to be applied only to the Plunge Feed output, per tooltip "Ramping settings affect Only Plunging Feedrate". I'm interpreting this to mean that the plunging feedrate will be used to display a calculated feedrate for ramping. However, the output values are in excess of the normal milling feedrate, which is obviously nonsense. 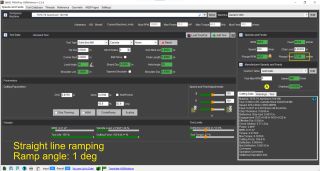 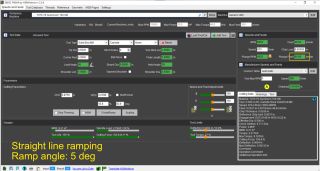 Thanks for your question.

It actually functions as designed.

Since this is aluminium it suggests higher feed rate for lower depth of cut.

Thanks for the quick respons. Your explanation makes sense. The current dialog-based inputs for the ramping calculator does make it hard to keep track of which factors are currently having an effect on the feedrate outputs.

As an addendum - invoking the Circular Interpolation/Ramping unchecks the "Slot/Pocket" option if it was already checked. This would seem to violate the Principle of Least Astonishment, since the options can be re-enabled with extremely minor effects on feedrate output. As a fellow software developer and only occasional machinist, I expect this bothers me more than most. Can you clarify what's going on here?

I just got some time to investigate the "Slop/Pocket" check box getting un-set after enabling the Circle/Ramp option. That is a bug indeed.
I have added it to the tracker and will fix it for the next update.

Regarding the second part of the question, SLOT-pocket should not change the feed rate as long as the actual depth and width of the cut remain the same.
There was this issue in the older version, but it has since been fixed. Please make sure you are running v2.3.6

If you can still see the issue, please send me screenshots so that I can reproduce them.